Vampires of the Deep

Think about how the sea lamprey affected the Great Lakes.

Vampires of the Deep

Eleven-year-old Beatrice Mertz held the slimy creature in her hand. Its long, snakelike body wriggled and jerked about. Some 100 razor-sharp teeth gleamed in its gooey mouth. Beatrice grabbed her knife and, in one swift motion, severed the creature’s head. She breathed a sigh of relief.

It was the summer of 1941, and Beatrice was working on her mom’s fishing boat on Lake Huron, one of the five Great Lakes along the border between the United States and Canada. The creature she had just killed was a fish called a sea lamprey. Like some sort of marine vampire, a lamprey attaches itself to a fish, drills a hole into its flesh, and slurps down its blood.

It was Beatrice’s job to get rid of as many lampreys as possible. This was important, if unpleasant. At the time, hundreds of thousands of sea lampreys were invading not just Lake Huron, but all of the Great Lakes. And they were killing the fish that Beatrice’s mom was trying to catch.

“When a fish came into the boat and there was a lamprey on it, my mom would say, ‘Beatsie, you take care of that lamprey!’” Beatrice remembers. “She would never allow a live lamprey to go back into the water.”

The lampreys were not just posing a threat to the livelihoods of fishers like Beatrice’s mom. They were on the path to causing catastrophic damage to the ecosystem.

Could anything be done?

When the Erie Canal was built in the 1800s, it was a marvel. It enabled ships to get from New York Harbor to the Great Lakes easily and quickly—in mere days instead of weeks.

The Great Lakes are the largest body of freshwater in the world. With 9,000 miles of shoreline and thousands of tributaries, the Great Lakes ecosystem teems with wildlife. There are bald eagles, moose, gray wolves, and many types of fish. Millions of birds migrate through the Great Lakes region every year.

Sea lampreys, however, don’t belong there. They are native to the coasts of the Atlantic Ocean. In the Great Lakes, lampreys are an invasive species. (An invasive species is a plant or animal that gets introduced into a new environment and causes harm.)

So how did lampreys end up in the lakes—more than 1,000 miles from the Atlantic Ocean?

Many scientists think Lake Ontario was the first of the Great Lakes to be invaded by lampreys. They believe the fish entered the lake through the Erie Canal, a human-made waterway completed in 1825. The Erie Canal provided easy passage for boats between New York Harbor on the Atlantic Ocean and the Great Lakes.

In 1919, another canal, this one connecting Lake Ontario and Lake Erie, was deepened so larger ships could pass through. The deepening of the Welland Canal also made it possible for sea lampreys to swim from Lake Ontario into Lake Erie, where they were first discovered in 1921. From there, the fish spread into Lake Huron, Lake Michigan, and finally, Lake Superior.

The sea lamprey has adapted over millions of years to be an efficient bloodsucking machine. It uses its toothy suction cup mouth to grip the skin of its prey and its sharp tongue to cut through the fish’s scales. Then the lamprey releases a chemical to prevent the wound from healing, which means its victim’s blood keeps flowing.

In the ocean, lampreys live in balance with their environment. They feed on large fish that can survive the bloodsucking, and they have predators like swordfish that keep their numbers in check.

But in the Great Lakes, lampreys have no natural predators. As a result, their numbers exploded.

What’s more, fish in the Great Lakes are smaller than those in the ocean. For them, a lamprey attack is often a death sentence. So as the lamprey population surged across the Great Lakes in the 1940s, populations of native fish, like lake trout and lake whitefish were decimated.

Commercial fishers like Beatrice’s mom were the first to notice. More and more fish caught in nets had lampreys attached to them. Or they had bloody wounds—a telltale sign of a lamprey attack

The fear in the fishing community was real. Fishing was at the heart of the Great Lakes economy and lifestyle. Without fish, thousands of people would lose their jobs.

But the imbalance created by the lampreys wasn’t just harming the fish. It was harming the entire ecosystem.

In the Great Lakes, the lake trout was the top predator. It kept the number of smaller fishes under control. With lampreys killing off lake trout, the population of a smaller fish called the alewife
(itself an invasive species) boomed. Alewives began gobbling up food that other creatures needed to survive.

Something had to be done—and fast.

Scientists tried cooking sea lampreys as a way to control their population.

Scientists swiftly got to work. First, they needed to learn everything they could about the lamprey—how it grows, feeds, and breeds. Scientists discovered that the bloodthirsty fish migrate up rivers and streams to mate and spawn. Scientists also learned that when baby lampreys, or larvae, hatch, they don’t feed on blood. The eyelash-sized larvae burrow into riverbeds and stick their heads out to feed on tiny plants floating in the water.

Only after about five years do the larvae grow their suction-cup mouths and razor-sharp teeth. Once they’ve transformed into bloodsuckers, they swim into the lakes in search of prey.

Instead of trying to capture and kill sea lampreys in the vast, open lakes, scientists decided to focus their efforts on the rivers and streams. They tested barriers and traps to catch sea lampreys as they swam up the rivers to breed. But the traps didn’t always work and were easily destroyed by floods.

Some scientists even experimented with cooking lampreys. If good to eat, lampreys could be caught in large numbers and sold as food. Unfortunately, scientists couldn’t find an appetizing way to prepare them. Meanwhile, scientists tested chemicals that could poison sea lamprey larvae before they transformed into bloodsuckers. Finally, in 1956, scientists identified a promising chemical that would kill larvae but leave other creatures unharmed.

The next year, they carefully applied the substance to a creek in Michigan. Within minutes, thousands of larvae floated to the surface—dead.

It seemed a solution had been found at last.

Scientists rushed to treat infested tributaries around the Great Lakes. But it wasn’t until the early 1960s that sea lamprey populations finally started to decline. By then, so few predators were left that alewife numbers were exploding, and the little fish were consuming nearly all the food in the lakes. With little food, alewives then began dying by the billions, floating up in giant, rotten masses, fouling beaches across the region.

Today, about 200 rivers are regularly treated to eliminate sea lamprey larvae. Though the fish still swim in the Great Lakes, their numbers are down 90 percent. (Don’t worry, they don’t feed on humans!) Scientists are also testing new ideas. For example, lampreys produce odors to tell each other which rivers are best for spawning—much like writing five-star Yelp reviews. Scientists are working on ways to use these odors to lure lampreys into traps.

All of these efforts have saved the fishing business in the Great Lakes, which brings in $7 billion a year and employs 75,000 people. “Without sea lamprey control, the Great Lakes fishery wouldn’t exist as we know it,” says Jenna Tews at the U.S. Fish and Wildlife Service.

As for Beatrice, who’s now 92 and has lived her whole life on the shores of Lake Huron, she’s grateful that her beloved Great Lakes were saved from the lamprey invasion. But most of all, she’s glad her days beheading sea lampreys are over.

“Today, I wouldn’t touch one!” she says with a laugh.

In the Great Lakes, one sea lamprey kills about 40 pounds of fish during its lifetime.

Attack of the Zebra Mussels

Disrupt the food chain: Large numbers of zebra mussels can eat so much phytoplankton that small creatures like shrimp and snails starve. With fewer small creatures, large predators have less to eat.

Zebra mussels are native to the Caspian, Black, and Azov seas. They were introduced to the Great Lakes around the 1980s, by ships traveling across the Atlantic Ocean. They then spread across the U.S. as a result of human activity.

600: number of U.S. lakes and reservoirs zebra mussels have been found in

1 million: number of eggs a female zebra mussel can release each year

31: number of states where zebra mussels have been documented

What Can Be Done?

The best solution is prevention.

This article was originally published in the November 2021 issue.

Essential questions: How do ecosystems become unbalanced? How do humans affect the natural world? How can environmental problems be solved?

My species is ancient—more than 340 million years old.

I have no jaws, bones, scales, or gill covers. I have a skeleton made of cartilage, like a shark’s.

I breathe through a row of seven pairs of tiny gills behind my mouth and eyes.

I have a circular mouth filled with 11 or 12 rows of horn-shaped teeth and a razor-sharp tongue. I latch onto my prey and suck its blood like a vampire.

Based on this description, draw me in the habitat where you think I might live.

“Vampires of the Deep”

“Attack of the Zebra Mussels”

Connected readings from the Scope archives about invasive species:

For more articles and stories that explore the relationship between humans and the environment and how environmental problems can be solved, check out our Special Collection: Earth Day Every Day. 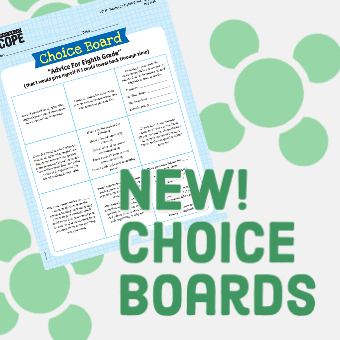 Back to School
Your Must-Have Inference Activity
View All

Back to School
Your Must-Have Inference Activity
View All