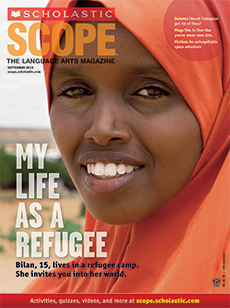 Scholastic Learn at Home includes many free articles for you to enjoy during your time at home. Click here to learn more about Scholastic Classroom Magazines.

Back to Learn at Home

Authors reveal what characters are like in many ways. They may tell you directly, as in “Kate hates eggs.”

Or they may show you through the character’s thoughts, speech, effect on others, or actions, as in “Kate wrinkled her nose at the eggs.”

2. Think of a few words to describe the characters of Eddie and Jordan.

Back then, I didn’t talk much. My big brother Jordan did enough of that for both of us. When he talked, I listened. When he had an idea, I followed along. That’s just how it was.

At least until that summer day before eighth grade.

The day began with Mom confiscating our phones and ordering us to go outside.

After Mom left for work, Jordan turned to me. “We’re going up Skull Mountain,” he announced.

I gave him a look. It was a terrible idea, even for him.

“Eddie, please,” Jordan snorted. “Don’t tell me you believe all that stuff about ghosts.”

I shrugged. We all knew the story—that anyone who tried to take anything off the mountain would suffer a terrible fate. Legend had it that hundreds of years ago, some explorers found rubies up there. They returned with pickaxes to cut the gems out of the rocks. But a sudden storm buried them alive.

No trace of them was ever found—except for one thing: a chipped and mangled pickaxe.

Now when the wind blows, people say you can hear a clang, clang, clang coming from Skull Mountain, as if those men are still up there with their pickaxes, doomed to bang away at the rocks forever, as punishment for trying to take what did not belong to them.

Still, I didn’t want to go—mostly because Mom said it was off-limits. But when Jordan opened the door and said “let’s go,” I didn’t say anything. I just followed him.

Jordan and I traipsed down a dirt road until we came to the foot of the mountain, where a dilapidated wooden fence stretched as far as we could see in either direction. A faded sign read “NO TRESPASSING.”

“See?” he said, when I pulled myself over the fence at last. “No ghosts.” Then off he strode, little clouds of dirt puffing up around his feet. Jordan was already six feet tall, and I had to jog to keep up with him.

It was miserably hot. There was no shade—no trees, not even a bush. Only rust-colored dirt strewn with rocks the size of basketballs. After an hour, we stopped by a boulder to drink some water and catch our breath.

“What’s this?” Jordan pointed at something white on the ground—something with empty eye sockets and a jaw full of mean teeth.

“A coyote skull,” he said, answering his own question.

Jordan bent to pick it up.

“Don’t!” I burst out, startled by how loud my voice was.

Jordan ignored me and picked it up anyway. The moment his fingers touched the skull, the sky went muddy. It was as if someone had turned down the sun.

Jordan didn’t seem to notice—he just stared at that skull, mesmerized. I wanted to tell him to put it down. I didn’t like all that death in his hands.

But before I could think of what to say—BOOM! Thunder cracked across the sky. A howl of wind whipped the dirt into a blinding swirl.

“Run!” I shouted, shielding my face with my arm.

Jordan just stood there, transfixed. I grabbed his hand. Still, he didn’t budge. Sand filled my nose. It snipped at my skin like thousands of tiny scissors. With all my strength, I charged down the mountain, hauling Jordan behind me until—

Suddenly, I knew what I had to do. I turned back to Jordan, yanked the skull from his hands, and threw it as far as I could.

And just like that, the clanging stopped and the storm dissolved into a calm blue sky.

“It hurts to open them,” Jordan moaned, covering his face with his hands. His eyes had been scratched up badly by the sand. It would be days before they healed.

“Where’s my skull?” he asked. I spied it in the distance next to a large rock. It seemed to be watching us.

To my surprise, Jordan didn’t argue with me. I took his hand and helped him to his feet. I was careful to walk slowly so he could keep up.

This story was originally published in the October 2019 issue 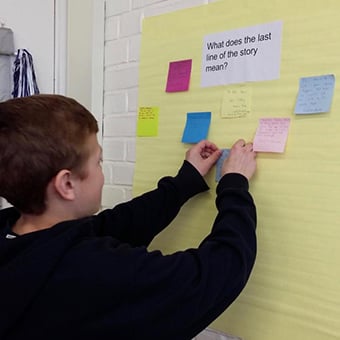