This short nonfiction text explores what it is like to be a movie location manager.

It was a hot day in the mountains near Los Angeles, and Ilt Jones was in trouble. He had slipped down a steep ledge. After a painful tumble, he had come to a stop just short of a 500-foot cliff. Had he rolled a few more feet, he would be dead.

What was Jones doing wandering around in the mountains by himself in the first place?

Jones is a location manager. When a movie or a TV show films a scene outside of a studio, it’s called shooting “on location.” Location managers are the people who “scout,” or find, those locations—which often means exploring remote and dangerous places. On that day in the mountains, Jones was looking for places to film a show called Live Shot. Fortunately, he sustained only minor injuries (though he had to be rescued by helicopter), but that was not the last of his adventures. While location scouting, Jones has also been thrown in jail, come face-to-face with a rhino, and floated down a snake-infested river in the jungle.

Ilt Jones at the Great Wall of China while working on the movie Transformers: Age of Extinction.

Until the 1970s, filming on location wasn’t very common. Most American movies and TV shows were filmed inside studios in Hollywood, California. Giant sets were built to look like faraway places—a street in Paris or a dusty saloon in the Wild West.

Today, many directors prefer filming out in the world to make their movies look more realistic. This is when the sharp eye of a location manager becomes key. A location manager finds that creepy forest for a spine-tingling scene in Stranger Things or that perfect castle to be used as Hogwarts for the Harry Potter movies.

And finding these places takes a lot of work.

For the movie Black Panther, Jones traveled all over South Africa looking for spots that would bring the fictional country of Wakanda to life. He spent weeks exploring beaches, climbing mountains, and traipsing through nature parks. During his travels, Jones sent photos to the director, Ryan Coogler, who had the final say on where the movie would be filmed.

The fictional country of Wakanda in Black Panther

There is more to location management than traveling. Location managers must also get permission to film in the places they find. This could mean working with a local government or persuading a family to let a film crew set up in their living room.

There are also many logistics to sort out. Location managers are in charge of hiring security, setting up tents for food, and arranging for portable toilets. These tasks may sound simple, but they often aren’t. For example, for the movie Kong: Skull Island, a scene was to be shot in a valley in Vietnam. But the only way to get there was in tiny boats—which is how Jones found himself floating down a snake-infested river in the jungle, carrying thousands of dollars’ worth of film equipment.

Location management can be risky too. Jones was briefly thrown in jail in the Bahamas because he accidentally trespassed on a military base while scouting for the movie After the Sunset. He encountered the rhino while scouting for Black Panther.

Ilt Jones overlooks a location in South Africa that was used as the backdrop for Wakanda.

Not everything you see on screen takes place where it appears to. Filmmakers may use computer-generated imagery (CGI) to alter backgrounds. Most of Black Panther, for example, was shot in Georgia—not South Africa. After locations in South Africa were chosen, a team of visual effects artists went to each place and took photos. Using CGI, these photos were edited in as the backdrop for the Black Panther scenes filmed in Georgia. (Remember the epic battle scene? That was shot on a horse ranch near Atlanta.) This made Jones’s job a bit easier: He didn’t have to worry about flying a crew and their equipment halfway across the globe.

For the most part, though, location managers enjoy the challenges of filming in far-flung locales. Even after nearly falling off a cliff, Jones still loves what he does. “I’m paid to find the most interesting, beautiful parts of the world,” he says. “It’s a dream job.”

What is one quality a location manager needs to have?

1. One quality a location manager needs to have is:

2. One piece of text evidence that supports my answer is: 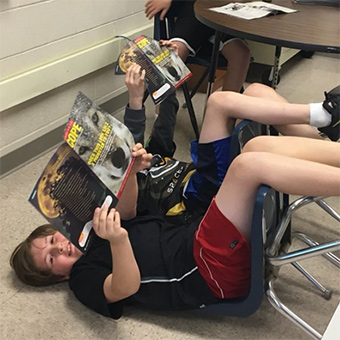